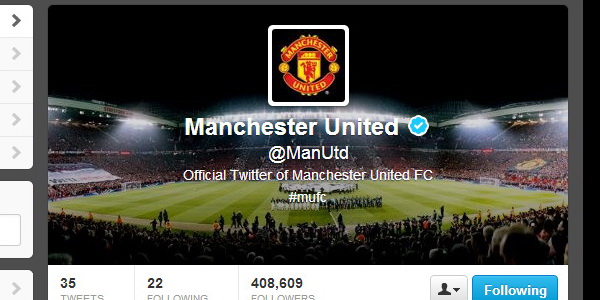 
Long time waiting for the United appear on this popular social network, and when it happened, destroyed many records Twitter.

Specifically, the team from Old Trafford for the first 24 hours of its existence, Twitter profile got 345,000 followers, which is the highest in the history of the social network.

Manchester United was defeated by records that have so far kept on Twitter Bill Gates, Tiger Woods and Oprah Winfrey.

For two and a half days @ ManUtd sent 35 tweet, including exclusive images, video and audio recordings from the Asian Tour, and for now is only for their own players.

The most popular football club on Twitter is Barcelona, ​​which has about 17.6 million followers.
at 12:49 PM
Email ThisBlogThis!Share to TwitterShare to FacebookShare to Pinterest
Labels: Interesting