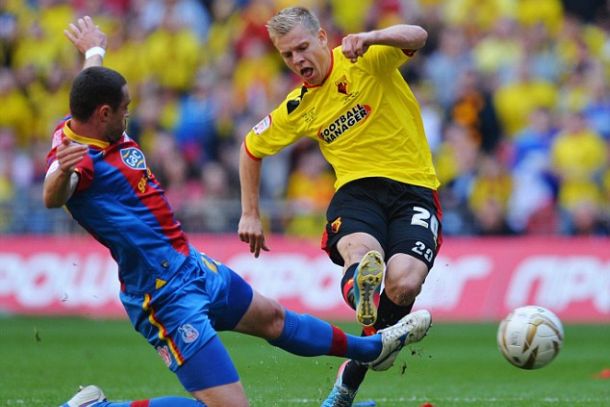 
The first half did not bring more excitement at Wembley. Both teams have been very cautious in this meeting, and is worth mentioning only attempt Zaha for Crytal Palace in the 20th minute and attempt Vydra Watford.

Below is seen a much better match, with plenty of opportunities. Watford was first threatened by Geijo, but the Palace goalkeeper Speroni tamed his attempt. Then a good opportunity for Crytal Palace had Wilbraham, but the favorable situation kicked right into Manuel Almunia.

Crytal Palace in 62nd minute again threatened by Wilfred Zaha, that three minutes later Wilbraham again found a good opportunity, but Almunia again saves his goal. Wilbraham was then in 83th minute another good saves but Almunia most deserving that goals after 90 minutes was gone.

In overtime again better play to Crytal Palace. Good game they paid off in 105th minute when referee Atkinson pointed to the spot. Responsible took Kevin Phillips, who scored for a 1-0 lead Palace.

Until the end Watford failed to get the tying goal, and will in the Premiership next season play Crytal Palace.
at 4:08 AM
Email ThisBlogThis!Share to TwitterShare to FacebookShare to Pinterest
Labels: Premiere League