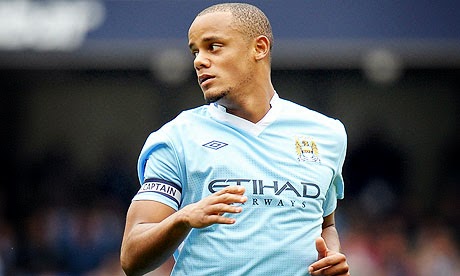 
Beaten 2-1 at home by Barcelona, Manchester City face an uphill task in the second leg at the Nou Camp.

Barcelona eliminated Manchester City at the same stage of the competition last year and history looks set to repeat itself.

Kompany endured a torrid evening on Wednesday, however remains confident Manchester City can record a famous result away to Barcelona.

Kompany said: "It was a bad first half but we were definitely very hopeful at the start of the second half.

"That is what we should look at and say is what we need to do when we go and play them over there. Of course there is hope. We were due some luck and Harty is a top goalkeeper. He did what he had to do and we have hope. "

For a third consecutive match against Barcelona, City finished with 10 men, after Gael Clichy's second half red card halted their momentum they had generated.

Kompany added: "You want to play games with 11 men. It has been happening a lot for us. Really what we need to try to do is finish the game with 11 men and see how that goes. "

Manchester City travel to face Liverpool on Sunday in the Premier League, looking to bounce from their European disappointment.
at 10:29 AM
Email ThisBlogThis!Share to TwitterShare to FacebookShare to Pinterest
Labels: Barcelona, Champions League, Manchester City, Vincent Kompany