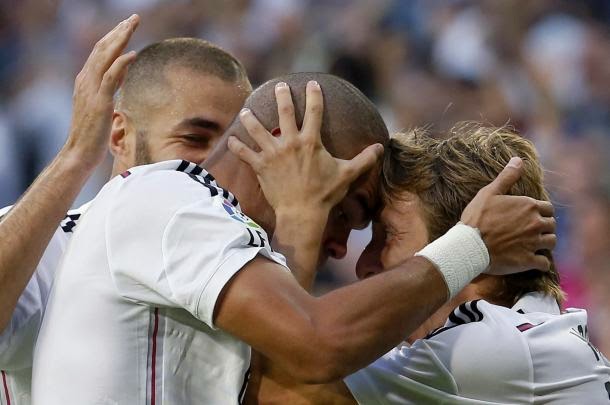 In the ninth round of the Spanish Primera Real Madrid and Barcelona have played 229 El Clasico. Won Real on their  Santiago Bernabeu with 3:1 and come leading Barcelona to just one point


Spanish derby between Real Madrid and Barcelona started great for the Catalans. Neymarwas guests brought the lead in the fourth minute of the game a shot from just outside the penalty area. Defence of Real was passive, and goalkeeper Casillas helpless.

The first chance of the match the home team had in the sixth minute, but Benzema shot very imprecise. Five minutes later the Frenchman after a great move by Real sent a header rebounded off the crossbar in the second attempt the shot hit the post.

Great chance for Barcelona appeared after 22 minutes, firing Messi, but Casillas was a perfect stop the goal from the Catalans.

Players of Real have twice sought a penalty during the first half, and they got it in the 36th minute. Ronaldo has the ball on the spot and put the 1: 1.

In 44 minutes, Marcelo sent a good pass in the box Barcelona header sent Rodriguez, but the result remained the same.

At the beginning of the second half Real reversed the result in their favor. Kroos in the 50th minute threw from the corner, but Pepesent ball in goal of Barcelona. Five minutes later the shot Rodriguez from 20 meters defended goalkeeper Claudio Bravo.

Madridistas were up to third goals came in the 61st minute and the scorer was Benzema.

Neymar is after 73 minutes sent bad shot to Real Madrid's goal. Four minutes later on the other side powerful blow of Rodriguez blocked the defense of Barcelona.

The players of Real Madrid are below paid more attention to keeping their goals and in the end they celebrated their deserved victory over Barcelona score of 3:1.