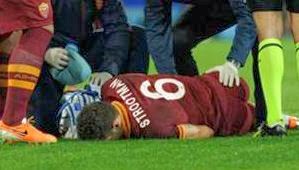 After six months out, Strootman is set to make his return for Roma earlier than expected on November 9.


Kevin Strootman has been a hot topic lately, especially considered he hasn’t been on a pitch since March. Out with a crucial tear ligament that saw him out of the World Cup; Strootman is expected to take the field again on November 9 when Roma meet Torino.

Strootman, a known favorite of former Netherlands manager, and current Manchester United manager Louis Van Gaal, has ruled the transfer gossip sites with a possible move to England. Roma emphatically deny they’ll sell the young midfield General, though the coach and Strootman himself have put holes in that argument.

After such a major injury, people usually spend their time asking if he’ll ever be the player he was before. With Kevin Strootman, they’re saying he’ll move to Manchester United or Roma will double his wages. And he’s only been practicing for a week or two.

After his surgery, Strootman declared he was determined to come back better than before; and, if he can, the football gossipers will have a busy next few months until the January transfer window opens. And, his return (along with Memphis Depay), may see Guus Hiddink’s hurting Netherlands side regain form.

at 1:57 AM
Email ThisBlogThis!Share to TwitterShare to FacebookShare to Pinterest
Labels: AS Roma, football news, Injury, Kevin Strootman, News, Serie A