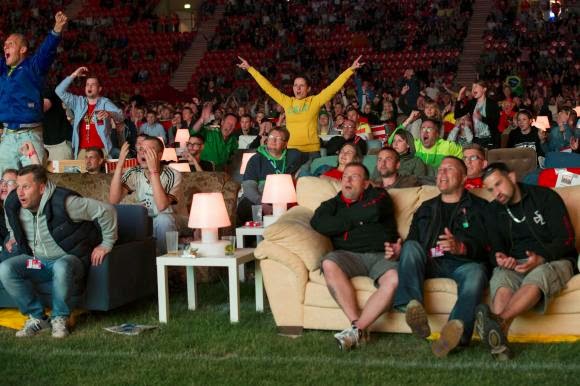 There is no doubt that football is the world's most popular game, for some people "football is not just a game, it is way of life"


Football fans around the world support their teams passionately, but the ultimate demonstration of adoration for one's team is to buy the ticket and watch a game live from the stadium. It gets even more interesting if the game involved is a derby. The stadium environment is simply electrifying, which explains the reason fans travel thousands of miles to watch their favorite teams play away games. These days, technology allows fans to follow their teams' exploits from the comfort of their seating rooms, on their computers and fans, or in a sports club. However, nothing beats the experience of watching a game live from the stadium. The following are the top five reasons people prefer watching football games from the stadium.

2. The carnival stadium environment. Passionate supporters show their love through cheering songs, waving flags, and chanting. The environment inside the stadium is usually exhilarating, and all fans, regardless of age or gender, usually enjoy all the memorable moments. Watching football on television is a secondary event, but real fans throng the stadium to participate in the carnival that cheering their favorite team entails. In some cases, it does not matter whether the team loses or wins, but being there to watch events as they unfold is the ultimate experience.

3. It is the definitive show of support. Football games are real battles and teams would do anything to win those crucial points or that elusive trophy. Having a passionate crowd behind the team creates a feeling of an extra player on the pitch. Fans who truly love their teams swam the stadium to chant themselves hoarse for the sake of the team.

4. To be part of the history. Football games around the world are wonderful experiences that remain in memory for generations. Fans who make it to the stadium leave with some memories that often last a lifetime. It is exhilarating to say, "I was there when Mario scored that decisive goal that enabled us win the trophy for the tenth time." It does not matter whether that happened twenty years ago, and the team has not won a major trophy ever since. All that matters is that the fan was there to witness the team's finest moment.

5. You get a chance to taunt your opponents. The stadium experience is not complete without an opportunity to taunt your opponents, especially when it becomes apparent your team will win. Even with the camaraderie, having a go at the opposing fans is always adrenaline-charged. Distorting the opposing team's anthem for obvious reasons creates the atmosphere required to enjoy a match.

The stadium experience is simply mind-boggling. Fans travel miles to cheer their favorite teams, while others apply for esta to enable them travel easily as they seek to cheer their teams to victory. What is more, some football grounds are hallowed and have amazing histories. Being there when the game kicks off makes a fan part of that history.

at 12:26 PM
Email ThisBlogThis!Share to TwitterShare to FacebookShare to Pinterest
Labels: Interesting, Stadiums