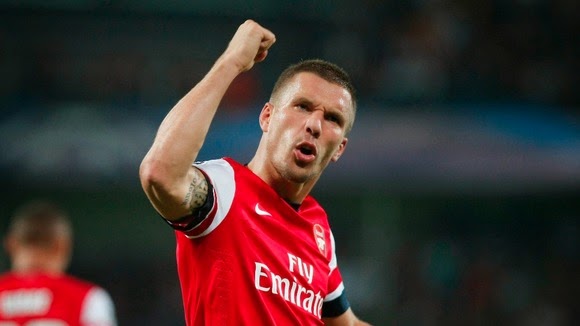 The World Cup winner has been heavily linked with a move to Serie A, although Olivier Giroud’s injury may mean Arsene Wenger won’t sell.

Podolski was left out of Arsenal’s squad at the weekend and the 29-year-old fuelled speculation of his departure on Monday by posting cryptic message on social media.

The Gunners striker said on Instagram: “Things work out best for those who make the best of the way things work out. Opportunities don’t happen, you create them!’

According to Ali Pektas, there has been no interest from Italian sides and Podolski will remain at the Emirates.

“I read in the newspapers that Juventus and Napoli were interested in Lukas,” Podolski’s agent Pektas told tuttomercatoweb.it.

“But there has been no approach from either of those clubs.

“I don’t know if he will go to Italy in this transfer window. I can’t say anything for sure.

“The only certainty is that Lukas has a contract with Arsenal.”

Wolfsburg and the Turkish giants Galatasaray have also been linked with Podolski, who has two years left on his Arsenal contract.