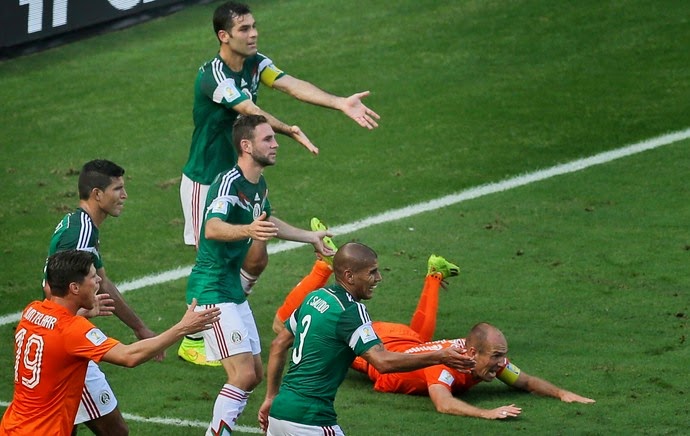 Robben won a 93rd minute penalty, which earned Netherlands a place in the last eight of the World Cup, and although he denied that he dived to win the spot kick, he did admit to going down easy in the first half.

After the game, Robben said, “The one at the end was a penalty, I was fouled. At the same time I have to apologise in the first half I took a dive and I really shouldn’t do that. That was a stupid, stupid thing to do but sometimes you’re expecting to be struck and then they pull their leg away at the last minute.”

Today FIFA have announced that no action will be taken against Robben for these comments with a spokesman saying, “We ask the players to play in the spirit of fair play. It’s up to the referees to manage a match.”

The Bayern Munich winger was again present in front of the media today as he took part in Netherlands after match press conference. Robben admitted that he may have been too honest in admitting the dive.

Robben said, “It’s a shame because yesterday in an interview I was very honest. Maybe honesty is sometimes punished.”

“I always prefer to be honest and I said there was one foul in the first half where I went to the ground when the opponent took his leg away at the last moment.”

“That was silly from me but it didn’t influence the game. It had nothing to do with the game and the penalty was a clear penalty.”

“I apologise for the action in the first-half but that’s football and it had nothing to do with the game.”