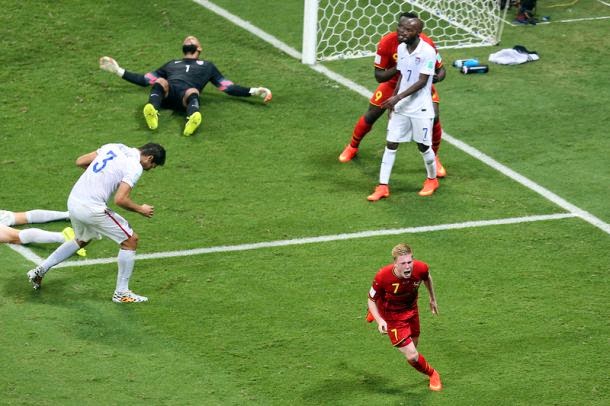 Belgium's football team tonight in El Salvador in the Arena Fonte Nova played last match eighth finals of the World Cup against the United States. The winner was Belgium in overtime 2-1

Brilliant match ended after 120 minutes and more successful were the Belgians who celebrated with 2:1.

In the first half both teams had several opportunities.

Already in the first minute Origi had a great opportunity but Howard defended the shot. After that tried and Zusi but Belgian 'keeper had no problems.

Dempsy after 21 minutes has shoted but Courtoais defended his shot, and immediately in the next attack De Bruyne has kicked ball but it goes a little wide.

After 26 minutes, tried and Witsel after a brilliant solo attack but the Americans have blocked his shot and the ball went to the corner.

By the end of the first half again tried De Bruyne but Howard again was in place and defending his shot so that on rest went with the initial score of 0-0.

Players of Belgium in the 56th and 57th minutes, had two great chances. First Origi firing but his ball hit the crossbar. After that tried and Jan Vertonghen but Howard was again in place.

Mertens is 60 minutes has received a long ball into the penalty area of America, but firing wide from a promising situation. Subsequently tried and Witsel but again tonight brilliant Howard was in place.

Eden Hazard has kicked in 79th minutes but the keeper _ American was in place and defended his shot. Belgians are in the last ten minutes had total field initiative. Hazar, Origi, Fellaini and Kompany were trying to shake network of the United States but Tim Howard proved to be a brilliant keeper, and every time he defended their hits.

In 92 minutes Hazard passed several American players added to Kompany who shoots from five meter but Howard that defended.

And then in the 94th minute at the height of attacks Belgian great chance for Americans. Jones landed a long range pass and Wondolowski from only three meters sends the ball wide.

In the third minute of the first overtime Belgium takes the lead. Great by the right side Lukaku passed ball to De Bruyne who scores for 1-0.

Despite the leadership of Belgium continued to attack. Tim Howard has shown that this is indeed a brilliant keeper. At 105 minutes, De Bruyne and Lukaku are swapped roles. Scorer of the first goal assisted for Lukaku who masterfully accomplished his first goal of the Mundial in Brazil for lead Belgium 2-0.

Just as started second overtime Americans have managed to reduce the lead. Green is phenomenal accepted the ball in the penalty area of Belgium and masterful sent into the net for 2-1.

In the 114th minute Dempsy coming alone with the keeper of Belgium but shot straight at him so that this opportunity has failed. After that the Americans had two good opportunity but failed to shake net of Belgians, and the'' Red Devils'' went to the quarterfinals where they will meet with Argentina.