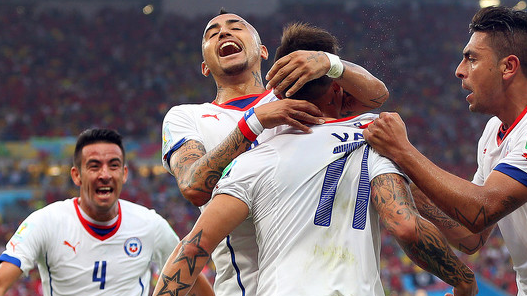 After the 1998th year France won the World Championship, whose were the hosts, but after four years in Japan and South Korea eliminated in the group stage without any scored goal.

A similar scenario happened and Spain, at least as far falling out after the group stage. Played are two matches in Group B and by two wins have Netherlands and Chile, while by two defeats have Australia and current world champion Spain.

Tonight is Chile secured passage in the next stage of the competition thus as in match with Spain was better and celebrated victory 2-0.

First is for advantage 1-0 scored Eduardo Vargas in the 20th minute and the victory was confirmed by Charles Aranguiz after 43 minutes.

Chile has had a chance to humiliate Spain (as did Netherlands 5:1), but the attackers were imprecise. And Spaniards had their chances but the brilliant Claudio Bravo stopped every shot on goal.

After the defeat of Uruguay from Costa Rica this is the biggest surprise of this World Cup. To Spain's left to play another match with Australia that will only decide who will finish in last place in the group.