Group F: Argentina three of three, the first points for Bosnia at major competitions ever

Group F: Argentina three of three, the first points for Bosnia at major competitions ever 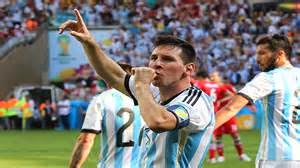 Argentina and Nigeria played a great game within the last round of the group stage. At the end of is celebrated Argentina with 3-2. Bosnia and Herzegovina overcome Iran 3-1 and won the first points ever in the World Cup


The great game played between the teams that will play in the next stage of the competition, Argentina has achieved a third victory in the group over the national team of Nigeria 3-2.

It started violently. Di Maria is in the third minute kicked on goal, Enyeama turned the ball into the post and the ball rebounded to Messi who is from ten meters strong hits the ball in the net of Nigeria. On the answer is waiting just 60 seconds. Nigeria equalized when is started from center with beautiful goal Ahmed Musa.

Argentina attacked in the ninth minute Higuain had a good opportunity to bring Argentina into the lead, but is kicked wide. Then Di Maria kicked in 30 minutes but Enyeama was sure. Ten minutes before the end of the first half occurred handicap for Argentina. Aguero is injured and left the game and was replaced by Lavezzi. By the end of the half Messi has once again returned with his sleight of hand and lead Argentina to the very end half. An amazing free kick, the ball glanced off the post and went into the goal near a helpless goalkeeper of Nigeria. It was the fourth goal Messi at this championship.

The beginning of the second half brings the equalizer. Again is scorer Ahmed Musa, who broke one on one with Romero and mastered it. Three minutes after that, again scoring for Argentina but this time not Messi but Marcos Rojo. Goal is reached after a corner. There was a time when the game is not anything significant happening on the ground up until the very end of the match when Argentina invaded again and created a few chances.

They threatened by Lavezzi, and then Garay and one of the last chance of the match was Di Maria who dribbled defense Nigeria but expressed Enyeama. Fulltime greeted in a quiet pace, Argentina ended the first, Nigeria behind it and our team who pay the price of expensive judicial antics from the previous match.

National team of Bosnia and Herzegovina is at farewell of Mondial achieved a historic triumph, their first at World Championships, which is still improved overall impression of the effect of selection Safet Susic in this competition.

Iranians was needed victory to qualify to the second round, but tonight they have failed to repeat that great game from the match against Argentina in the last round.

Triumph selection BiH announced Edin Dzeko in the 23rd minute, beautiful shot from twenty meters and minimum benefit Bosnians managed to hold until the end of the first half.

And the Iranians have nothing to hope, confirmed and Pjanic in the 14th minute continuation of the match, when after the assistance Tin Sven Susic duplicated advantage of his team - 2:0.

Some sort of hope the Iranians returned Reza Gočanejhad after 82 minutes after corner and one suspected positions, but it is already in the next minute from excellent doubles back Vršajević, which is a precise shot sideways from the right sent the ball into the opposite corner and set up the final 3: first