World Cup History: It all began in Uruguay

World Cup History: It all began in Uruguay 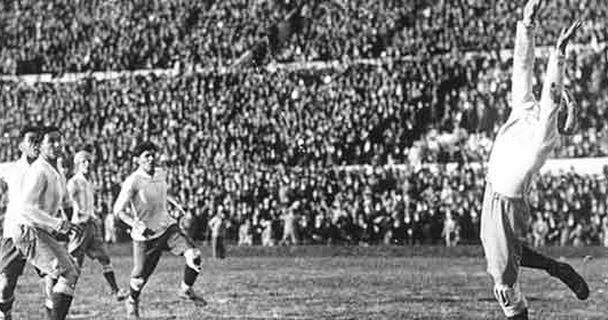 History of the world championships began to writing 1930th year in Uruguay. The first championship was played with 13 teams, with no qualifications

At the trip started on 21 June, in Montevideo appeared on July 4. For all the time by remained written as the first match at the World Cups played France and Mexico.

The French are celebrating 4-1, the first goal of the championships scored Lucien Laurent in the 19th minute of the game. The four best selections are found in the semi-finals where we had two "sixes". Argentina has shattered Americans, Uruguay beat Yugoslavia.

Grand Final was played on 30 July at the Centenario. Argentina led 2-1, but the hosts are all overturned below. Cea, Iriarte and Castro were the scorers. This last is recognizable in that they he was invalid or did not have one arm.

Besides Castro, in the scuad of Uruguay was Jose Leandro Andrade, who was blind in one eye. Was sunk on the ground two years earlier. Main referee of the final meeting was a Belgian Langenus, while his assistants were another Belgian Christophe and Ulises Saucedo from Bolivia.

Saucedo performed two role in this championship, besides the referee, was the coach of Bolivia. The best scorer of the tournament was the Argentinian Guillermo Stabile with eight goals. At that time he was a player Huracan, later arrived to Italy (Genoa and Napoli).