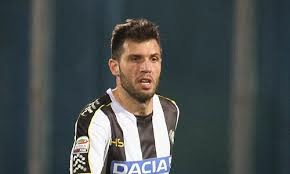 The 33-year has settled nicely with the Bianconeri since his transfer in 2008 from Napoli when the club agreed to a co-ownership deal with the Partenopei for €2.5 million, purchasing the remaining half a year later at €1 million for the club’s current vice-captain.

The Zebrette released a statement on Thursday regarding the contract extension on the team’s official website as the club prepares to usher in a new era.

Coach Francesco Guidolin, who has guided the club through multiple rebuilding projects in his four year tenure at Udine, has already announced plans to step down though he will remain with the club as a director.

Captain Antonio Di Natale had announced his retirement but recently alluded to a potential return given his fine form at the end of the campaign.

Domizzi has appeared in 181 matches in all competitions for Udinese in his six years at the club, appearing in 26 Serie A matches this season.

at 12:45 PM
Email ThisBlogThis!Share to TwitterShare to FacebookShare to Pinterest
Labels: Maurizio Domizzi, Serie A, Udinese