Real overcome Bayern, the decision about the finalists of the Champions League at the Allianz Arena

Real overcome Bayern, the decision about the finalists of the Champions League at the Allianz Arena 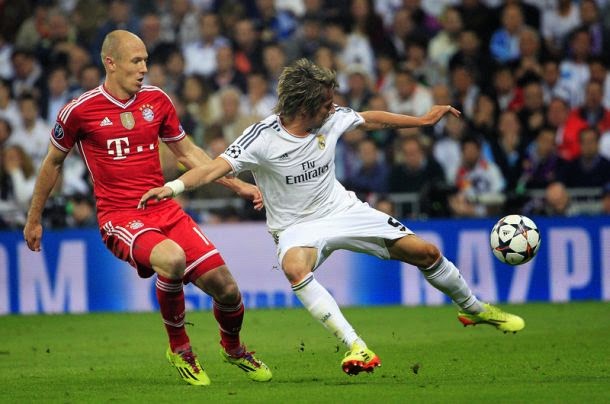 In the opening minutes of the match, the team of Pep Guardiola threatened through Mario Mandzukic, Arjen Robben and Toni Kroos.

However, Madridistas took the lead after a brilliant action that began Cristiano Ronaldo. Portuguese is with long ball found compatriot Fabio Coentrao which adds to Bayern box area where is Karim Benzema who without any problems sending the ball into the net Manuel Neuer.

After that have occurred opportunities on both sides. Di Maria and Cristiano Ronaldo kicked, but failed to overcome the German goalkeeper.

Below, the best player in the world again is kicked, but Neuer is again great defended.

Robben and Ribery are trying by solo action, but failed to break through tonight excellent Real's defense.

They could Madridistas to 2-0 in the 68th minute, but Neuer defended Ronaldo's great shot. By the end of the game the result is unchanged.

Champions League finalists will be known next week after a re-match at the Allianz Arena.