Europa League: A big advantage for Sevilla, small for Benfica

Europa League: A big advantage for Sevilla, small for Benfica 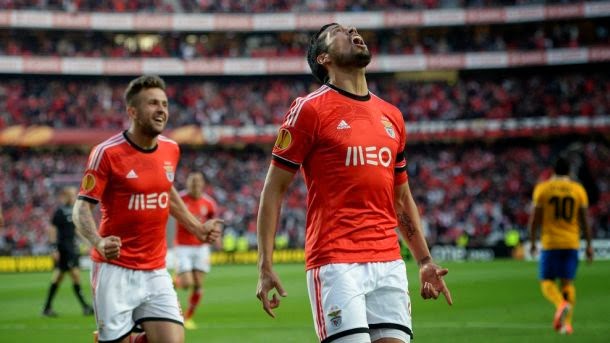 After the first matches of the Europa League semi-finals closest the final is team Sevilla, which is at home against Valencia enrolled victory 2-0, while Benfica against Juventus celebrated the victory with a minimum advantage of 2:1

Sevilla is from first minute of the match started according to goal of guests from Valencia. Despite several good opportunities Valencia did well kept until the 33rd minute when Sevilla finally managed to shake the net of guests.

Valencia is in the the second half, played  much better in the order to achieve a goal that would facilitate things in the the rematch at Mestalla.

Despite mighty efforts to achieve this goal Valencia failed to score, and in the rematch will have a very difficult task to make up two-goal advantage of Sevilla.

Jorge Jesús team from the first whistle guests from Turin showed that they will not easily in the role of favorites. Just three minutes were needed Benfica to gain an advantage.

Miralem Sulejmani has a great from corner, hired Argentine stopper Ezequiel Garay who heads put the ball into the goal Gianluigi Buffon for the great celebration of local fans.

Juventus in the second half all the cards threw on the attack in order to equalize and gain a huge advantage before the return leg in Turin. The attacking play paid them after 73 minutes when Carlos Tevez equalized to 1:1.

Received goal forced the home side to go back towards Buffon's goal, and the goal for 2-1 is crowned Lima in the 84th minutes.

Benfica in Turin goes with the advantage of one goal but Juventus remains the favorite to qualify for the finals due to the away goals. Juventus players will give their best in order to secure a place in the finals which will be played in their own stadium.