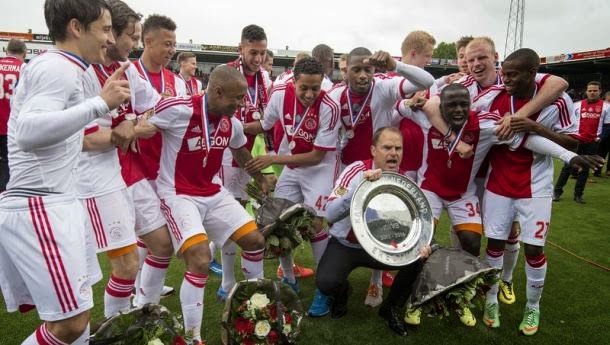 Ajax went into their penultimate game of the season knowing just a point against Heracles was enough to seal the title, with Feyenoord six points behind with two games left. In the end Feyenoord may have beaten Cambuur 3-1, but Ajax’s 1-1 draw with Heracles saw them lift the trophy.

The final performance wasn’t vintage from Frank de Boer’s men, who went ahead when Lasse Schone smashed in a 30 yard free kick, before Heracles equalised soon after when Simon Cziommer fired in another free kick. The game simmered out in the second half with neither side really showing an ambition to win the game, and the final whistle was met with wild celebrations from the Ajax players and staff.

Frank de Boer has now put his name into the Ajax record books as the first coach to guide Ajax to four Eredivisie titles in a row, achieving what the likes of Rinus Michels, Louis van Gaal or even Johan Cruyff couldn’t do.

PSV before today were the only club to win four straight Eredivisie titles, but now Ajax join them on the list. There will be a huge party in Amsterdam tonight.

at 10:05 AM
Email ThisBlogThis!Share to TwitterShare to FacebookShare to Pinterest
Labels: Ajax, Ajax champion, Eredivisie, Netherland