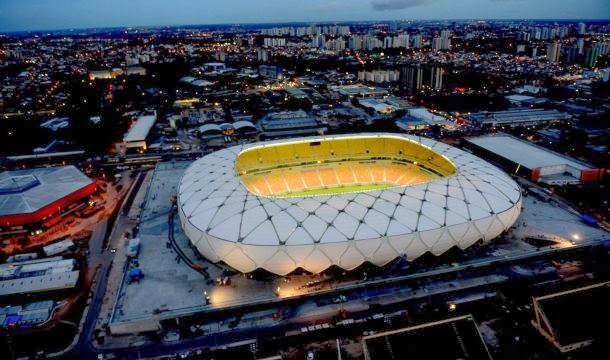 Arena da Amazonia in Manaus, one of the buildings in which to play the World Cup matches, is finally open

The stadium, which is located in the rainforest opened after more than three years. Deadlines for the construction of the stadium whose capacity is 44,000 seats were pierced three times, and the cost of work at the end are climb on the huge 250 million.

Opportunity to "testing" lawn of the stadium will have a Croatian football players who will 18th June, in a noon match against Cameroon. Besides the Croats, on this stadium still meet and England - Italy, the United States - Portugal and Honduras - Switzerland.

Arena da Amazonia is not yet fully completed, but remained only the final "make-up". The honor of opening is belonged football players Nacional and Rem, who are in front of over 20,000 spectators played 2:2.

Host has used this match as a simulation of the system for the World Cup, so on insurance was more than 2,500 police officers and stewards. Around the stadium is set the zone that could be entered only with a purchased ticket and ticket control was rigorous.