Arsenal embarrassed at Anfield from Liverpool

Arsenal embarrassed at Anfield from Liverpool 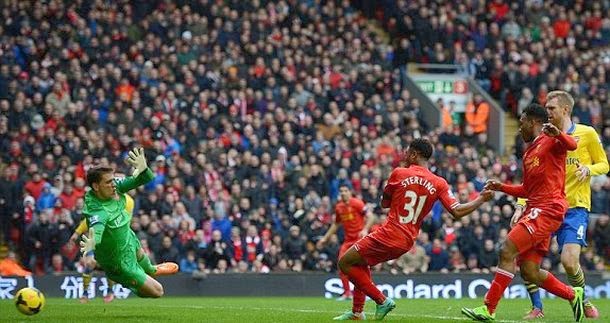 In the derby 25th round of the English Premier League, Liverpool at Anfield Road ran over Arsenal with a high 5:1 and so returned to fight for the title

Derby, which has long with impatience expecting supposed to be uncertain and tense until the very end of the game, but unfortunately from Arsenal fans suspense lasted a very short time. Arsenal goalkeeper had the ball from the net, but in the first minute of the match when he was checkmated by Martin Skrtel.

The visitors did not recover from the initial shock, and it was already 2-0. In the 10th minute is a superb top corner in the penalty area was Martin Skrtel and by second goal in the match chackmated Arsenal goalkeeper . Four minutes later, spectators have seen the most beautiful move in the game.

Luis Suarez is with fantastic volley from almost 30 meters hit the post of Arsenal goal, and that the ball ended in net it would have been probably the most beautiful goal of the season. However, only a minute later, again shaking net guests from London. This time the shooter was Raheem Sterling.

Complete domination of the Reds and Arsenal deluge continued in the 20th minute when Daniel Sturridge scored for 4:0. By the end of the first half result is unchanged although Liverpool was a constant threat on goal guests.

The second half started almost the same way, only this time Liverpool players to score needed seven minutes. With second goal in the match by Daniel Sturridge has removed all doubts about the winner, if there is any at all, and after first 20 minutes.

rsenal managed to reduce the score after 68 minute from penalty by Mikel Arteta , a penalty is caused a Liverpool captain Steven Gerrard who crashed Chamberlain. By the end of the game Arsenal had slightly more possession of the ball, but failed to do anything serious.

Arsenal suffered a heavy defeat. Only what fans and Arsene Wenger may be satisfied is return of Jack Wilshere in squad after severe injury. Liverpool after a couple of bad results back on track and re-joined the fight for the title.