Scandal on the island: The secretary of Barton slept with half team

Scandal on the island: The secretary of Burton slept with half team 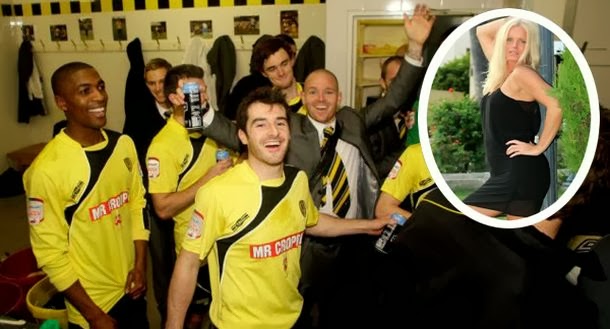 Middle-aged secretary Kerry Miller slept with almost half the team, while goalkeeper once worked as a gigolo, reports English media. The story of an unusual club began to interest the British press when it was revealed that the 46-year-old administrative worker sent her nude photographs to players.

Then it was discovered that at least 15 times entered the locker room immediately after showering footballers at the end of the game. Against her was charged with sexual harassment, and then they began arriving in the public and other details.

Kerry Miller is on trial admitted that their photos in underwear sending 23-year-old attacker Billy Kee. He then admitted that he had occasional sexual relations with a former member of the club, Ryan Austin, a third testimony is admitted that from September to December 2012th in connection with the goalkeeper Stuart Tomlinson.

He is, however, story for itself. When he was not among the goalposts, he worked as a male escort ladies which would paid for it. Sometimes the money earned as a model, and after a knee injury he went to the U.S. to seek fame as a professional wrestler and a wrestler-showman.

at 1:02 AM
Email ThisBlogThis!Share to TwitterShare to FacebookShare to Pinterest
Labels: Kerry Miller, Scandals, secretary of Barton