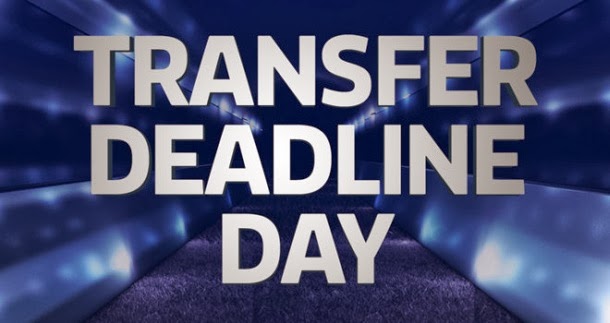 18:32 Lee Cattermole will probably continue his career in the Stoke, Sky Sports claims that the clubs agreed amount of compensation.

18:08 Tin Jedvaj will spend the rest of the season on loan at Verona, confirmed the Roma.

17:33 Brazilian Rafael Tolo is a new member of the Roma confirmed Sao Paulo. Tolo comes on loan until the end of the season, but Roma will have the opportunity to buy out contract.

17:19 Fulham left Taarabt and Berbatov, and arrived Mitroglou and Holtby. But it does not end at Craven Cottage they want and Heitinga.

17:17 Dimitar Berbatov is officially a resident of Monte Carlo. In Monaco arrives on loan from Fulham.

17:07 Portuguese media claim that the possible transfer in which in the package arrived at the Etihad, Fernando and Mangala and definitely failed. New negotiations are possible only in the summer transitional period.


16:56 President of St. Etienne, Roland Romeyer confirmed that Joshua Guilavogui and Benoit Tremulinas come on loan. On the other hand, the club has left Faouzi Ghoul, who continued his career in San Paolo.

16:51 Gael Kakuta is a new member of Lazio claim the media on the Apennines. There is still no official confirmation.

16:45 The media in Spain claim that Diego again comes to Atletico Madrid on loan. In his first season at the club he played 43 matches and scored six goals. In the final of the European League against namesake from Bilbao scored the third goal of the match.


16:29 Kostas Mitroglou is new member of Fulham. Already former football player the Reds from Piraeus signed a contract on four and a half years.

16:08 Thievy Bifouma is new member WBA. Football player comes on loan from Espanyol with the possibility of redemption contract at the end of the season for four million euros.

15:58 Valencia is from Brazilian Cruzeiro for 3.5 million led the U-20 national team player of Brazil Vinicius Araujo.

15:25 Kim Kallstrom is on medical examinations in London. Spartak Moscow confirmed his transfer to Arsenal.

15:15 The island's media reported that Manchester City refused an offer of Liverpool for Micah Richards.

15:05 Jason PUNCHEON left the ranks of Southampton and signed a contract with Crystal Palace.

14:49 To Konoplyanka offered a contract for five and half years. Ukrainian wants to Liverpool, but Dnipro does not want to let him go so easily.

14:45 Pellegrini: For now there is no transfer, but it is not excluded that possibility. Recall Citizens want football player of Porto, Eliaquim Mangala.

14:23 Press on Apennines claim that the agreed transfer between Inter and Livorno. Ishak Belfodil should leave the Milanese.

14:01 Jindrich Stanek, 17-year-old goalkeeper from Sparta Prague is a new name at Goodison.

13:42 Kurt Zouma is new member London's Chelsea. DF however will not come to London this January. By the end of the season will play on loan at St Etienne.

13:36 Beppe Marotta and Marco Branca met in Milan. The theme are of course Fredy Guarin and Mirko Vucinic. Whether it will finally come to an agreement?

13:28 Danny Graham is a new member of Sunderland. Black Cats had to set aside five million pounds for the now former player Swansea.


13:17 Although linked with Inter, Ben Arfa is unlikely to leave England.

13:11 Lewis Holtby goes on loan from Tottenham, in Fulham.

12:54 Beside Kallstrom on target Arsenal is top scorer Miroslav Klose of Germany national team. Will the German leave Olimpico.

12:34 Adel Taarabt reinforcing the ranks of Milan. He came on loan from QPR, although the first part of the season played on loan at Fulham.

12:28 Ludovic Obraniak should soon be introduced as the new football player of Werder Bremen.

12:22 Dimitar Berbatov arrived in Monaco, just yet medical examination shares him from signatures for a new club.

12:07 Yevhen Konoplyanka could reinforce the ranks of Liverpool. Ukrainian is still a member of the Dnipro.

11:51 Wenger: It will be more boost the last day of the transition period.

11:41 Heitinga very close to departure from Goodison Fulham. The media in England claim that only awaits the approval of the doctoral team club from the Thames.

11:37 Monaco very close to bringing Dimitar Berbatov. Bulgarian should now expected to sign a contract with Monaco, report the media in France.

11:24 Mohamed Sissoko has terminated the contract with PSG, will continue his career in the ranks of the Spanish Levante.

11:17 Milos Jojic is new member Borussia Dortmund. The now former footballer Partizan signed a contract with Borussia on four and a half years.

11:12 Salomon Rondon left the ranks of Rubin Kazan and moved to St. Petersburg. Striker from Venezuela is a big reinforcement for the leaders of the Russian championship.
at 7:13 AM
Email ThisBlogThis!Share to TwitterShare to FacebookShare to Pinterest
Labels: Transfer Deadline Day, Transfers, transitional period