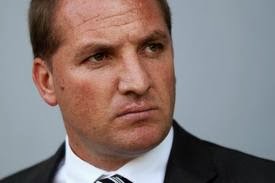 The manager of English football club Liverpool, Brendan Rodgers, was a bit sarcastic after his striker Luis Suarez, in a 5-1 victory over Norwich, enrolled four goals and assistance


Recall, the leading team of the premier league table Arsenal this summer trying to bring great Uruguayan strikers in their ranks, and on one occasion was offered 40 million and one pound.

Arsenal is believed that Suarez has a contract buy-out clause in the amount of 40 million pounds, but it turned out to be false information, but the Gunners are due to extra pounds and became a figure of fun. Opportunity to execute used the Rodgers:

"The pleasure is to watch him play, and I still believe that Suarez his best football year given Anfield. Liverpool go together like hand and glove.He is very happy here and is strongly linked with the club and the fans," said Rodgers and added:

"His performance was brilliant.I have never seen such a thing. I think it should be considered one of the best strikers in the world after this show. Maybe now worth even more a pound!"

at 4:00 AM
Email ThisBlogThis!Share to TwitterShare to FacebookShare to Pinterest
Labels: Brendan Rodgers, Liverpool, Premiere League