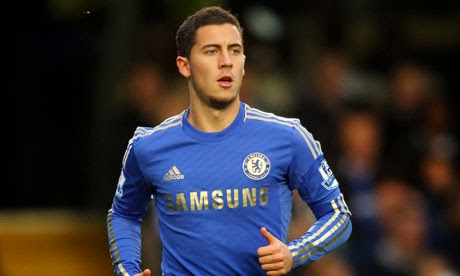 Team PSG ready offer in the summer to lead Chelsea football player. If it comes to that transfer will collapse record height of transfer that has set Gareth Bale

PSG will not give up the intention to bring to its team Eden Hazard. According to the media in France, Parisians follow the games great midfielder since his days in the League 1
From the moment when Hazard decided to, after solved the to leave Lille, choose Chelsea PSG and not PSG much has changed.

First of all, millions which team from Paris has on the account. Although Hazard recently stated that there is no intention of leaving London, PSG have a way to consent to become part of their paid expensive team. One is that the Belgian often spend their free time in Paris, to has a lot of friends in the PSG team, the fact that he wants to change his agent, but above all, millions who can offer to him.

French media said that if Chelsea agree to sell their probably the best player, it have to offer will be more than 91 million, how much is paid for Bale.

As far as the football player, the champion of France offered to him an annual salary of 15 million euros, and the club would pay for any tax that Hazard was obliged on the basis of such a high salary.

If to the aforementioned transfer occurs then it will definitely all be clear about the above-mentioned "financial fair play" that Platini mention there is no question.