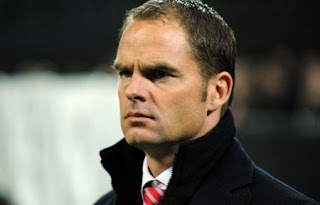 
De Boer faced the Celtic crowd as a Rangers player nearly ten years ago, but although playing for the rival team, he has a special feeling for the Celtic Park crowd.

He said today, ”When you are young, you want to play in this kind of stadium and this kind of atmosphere. It has to give you more adrenalin in your body to perform better.”

“If you’re playing worse than your normal level, maybe you’re not good enough to play at this level.”

“Of course, you can be nervous but when the referee starts the game, you have to get rid of the nerves and enjoy a great stadium and a great pitch. The atmosphere is still in my mind. For me, it was a great adventure,”

Ajax need to secure a win in Glasgow after failing to win in their first two games against Barcelona and AC Milan, but the Scottish side have an excellent home record in Europe, and start the game as favourites.

at 12:39 AM
Email ThisBlogThis!Share to TwitterShare to FacebookShare to Pinterest
Labels: Champions League, Netherland