"Team Galaxy 11" started on the historic fight with aliens!

"Team Galaxy 11" started on the historic fight with aliens! 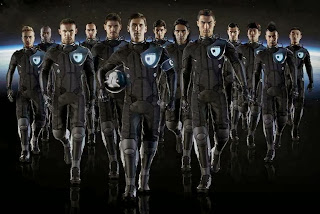 Messi, Cristiano Ronaldo, Rooney, Falcao and others have gathered and started into fight for the defense of the Earth in the newest Samsung commercial


The company Samsung has announced a new advertising spot within the campaign "Football will save the planet" for their latest phone Galaxy XI, which involves a world famous football players. As you probably know, the whole scenario of the campaign is that aliens came to earth and caused its inhabitants to a football match where the winner gets the planet.

Tim, Galaxy 11, which will be from the bench to lead the legendary Franz Bekenbauer be compiled for months, and has recently been published and the final composition of the team that will be in a fictitious match to fight for the survival of all of us on this planet. Captain Lionel Messi, and beside him will play Mario Goetze, Wu Lei, Wayne Rooney, Alexander Kerzhakov, Lendon Donovan, Radamel Falcao, Victor Moses, Oscar, Cung Li Jong, Iker Casillas, Stefan el Schaarawy and Cristiano Ronaldo.

In the latest video, which is published by a famous Korean company, you can see how the team came together and embarked on a historic fight for the earth.