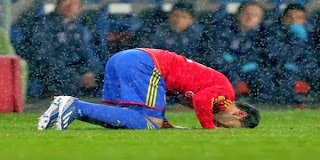 Liverpool is close to bringing the 21-year-old Egyptian wing attacker Mohamed Salah from Basel, who is willing to pay 7 million pounds, reports the Mirror

Salah is this season playing well for Basel in the Champions League. To Chelsea has scored in both games, and has attracted interest club from Stamford Bridge .

But him more attracted to the idea of playing at Anfield, but for that option was interested and Brendan Rodgers, manager of "reds". Salah is for Egyptian national team scored 17 goals in 26 matches.


Mirror states from previously known information as Rodgers to Liverpool wants to bring the Croatian player Ivan Rakitic from Sevilla, and he is ready to let a representative of the Denmark defender Daniel Agger on loan to Napoli, and then sell him in the summer for 8 million pounds, but only under the condition that previously brought in a defensive player.