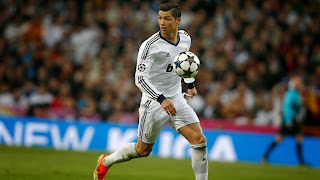 Footballer of Real Madrid and the Portuguese national team, Cristiano Ronaldo was chosen as the best player in the choice of the magazine World Soccer

In the 31st selection of the best football players of the year by journalists from around the world celebrated the Portuguese ahead of Lionel Messi and Franck Ribery.

This is the second time that Ronaldo named the best in the choice of World Soccer, the first time he's succeeded in 2008th

Best coach is Jupp Heynckes, who celebrated in front of Jurgen Klopp and Diego Simeone.


For the best Club in 2013th elected Bayern Munich, the Bavarians were left behind Atletico Madrid and Borussia Dortmund.
at 1:52 PM
Email ThisBlogThis!Share to TwitterShare to FacebookShare to Pinterest
Labels: BBVA, Cristiano Ronaldo, Primere