Statement by Mesut Özil which will not like United fans

Statement by Mesut Özil which will not like United fans 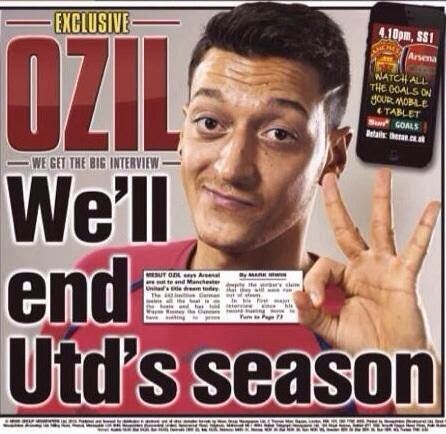 Today at Old Trafford will be played derby between Manchester United and Arsenal, and the battle began much earlier in the media

The most valuable reinforcement Arsenal and one of the best players of the club representative German Mesut Oezil gave his comment before today's duel which will not like fans of'' Red Devils''.

"We're going to Old Trafford to have fun and win. I think that we do not have anyone to prove. We know what quality we have and we want to be successful on the road this season. It is not our plan to play a draw at Old Trafford. If we want to achieve objective of our coach, then just win out of the question'' said a German, and he added. ''With win we want to end the season for Manchester United and crash their dreams about title," said the brilliant Mesut Oezil.