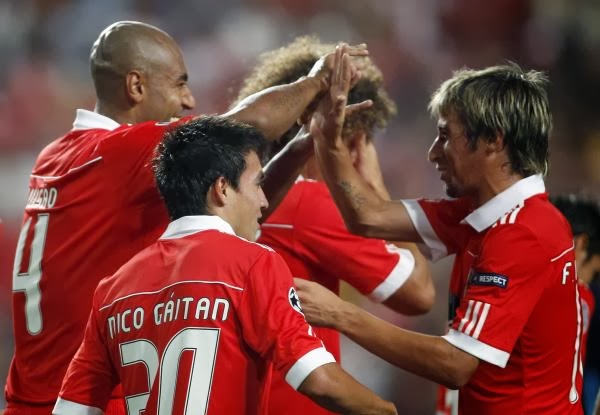 After enduring one of the worst transfer windows in recent history, there is hardly any doubt that David Moyes, the Manchester United manager, will be spending big in order to his prove his doubters wrong, stamp own authority and bid a strong challenge for the Premier League title as well

Manchester United are showing an interest in Benfica’s highly rated winger Nico Gaitan, who is a long term target of the club, and now, as per two major sports newspaper of the country – A Bola and O Jogo – United are seriously considering a move for Benfica trio of Nemanja Matic, Niko Gaitan and Ezequiel Garay.

According to the reports, Man Utd have even sent scouts to collect relevant information about the three players as Moyes is plotting a move for a collective amount of around €80million.

Although signs are positive after their recent victory over Fulham on Saturday that United are slowly starting to deliver under Moyes, but there are few positions that could need reinforcement.

Garay claimed last month that he was due to join the Red Devils in the summer for a reported fee of £18m but new manager David Moyes had blocked the deal. The Argentine star claimed that a deal was in place, as Sir Alex Ferguson had trailed him for months. With Rio Ferdinand reaching the apogee of his career, if anytime the club should feel the need of re-investment on a potential class defender, it is now.

Likewise, Chelsea and Liverpool target Nemanja Matic will bring the class and guile that United midfield are lacking at the moment. Summer signing Marouane Fellaini may bring his physical side to the game, but the acute lack of class in the middle, which once Paul Scholes used to provide, has been clearly visible.

Losing three quality players could be a blow for Benfica but that is how they operate their business. They buy players at a very low cost and sell them for a high price in Europe. And that too, when they feel they’ve the required back-up ready in place. So, they might be interested, should they feel the offer is right.