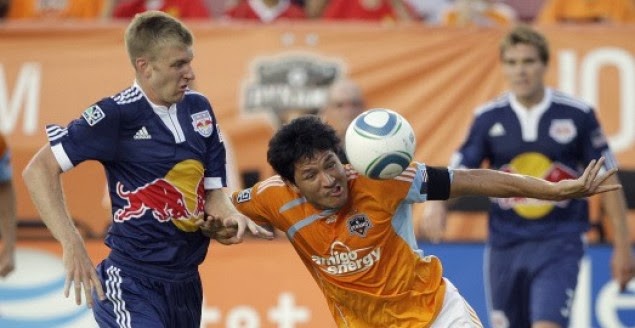 Houston scored two second half goals, including one in stoppage time, erasing a big first half from the visiting New York Red Bulls this Sunday and sending the teams home-and-away series back up to New York tied it totals goals


Omar Cummings finished a stoppage time scramble in front of New York’s goal for the late equalizer in Sunday’s 2-2 draw at BBVA Compass Stadium, the first of this two legged Eastern Conference semifinal series.
The New York Red Bulls, who were rolling so mightily, with so much authority and swagger through the final weeks of Major League Soccer’s regular season, appeared ready to do the same in the playoffs.
at 6:26 AM
Email ThisBlogThis!Share to TwitterShare to FacebookShare to Pinterest
Labels: Houston Dynamo, MLS news, New York Red Bulls