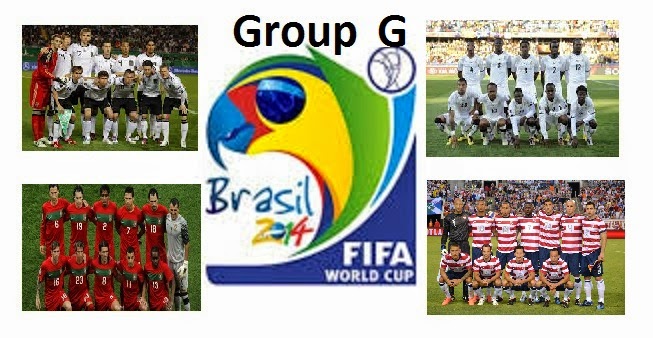 Favorites of this group are two teams (Germany and Portugal), and many expect that they go further. However, it is certain that the in advance should not write off Ghana always awkward the U.S. team

This is it: the proverbial group of death. Rarely have we seen a group in which the second and fifth-ranked teams in the world end up in the same group. Portugal will be rueing their stop-start qualification campaign which never really went beyond second-gear for costing them a potential seed at this year’s World Cup. As for Ghana and the Americans, they will resume a unique World Cup rivalry: this will be the third successive instalment of the World Cup in which these two teams will meet.

But what World Cup is ever complete without the presence of Germany, Die Mannschaft? In fact, barring the first World Cup in 1930 and the 1950 World Cup from which they were banned, Germany has qualified for every single World Cup tournament. And the current crop seem as good as any other.

Earmarked as the favourites to lift the trophy this time round, Germany will no doubt be motivated by the near-misses of recent tournaments, ranging from two finals appearances (World Cup 2002, Euro 2008) and three semifinal appearances (World Cup 2006, World Cup 2010, Euro 2012). Germany’s current squad, though, might just be the one to break the curse. For one, Germany is covered in every position in the field. In fact, they have a huge surplus of attacking players which will be a positive dilemma for the astute Joachim Löw.

Try picking the best midfield five from a set of İlkay Gündoğan, Bastian Schweinsteiger, Lars and Sven Bender, Toni Kroos, Thomas Müller, Julian Draxler, Mario Götze, Marco Reus, Mesut Özil, Lukas Podolski and so on. Defensively, too, Germany is more than contended, but a recent injury to Mats Hummels might be a bit of a dampener.

The only point of concern is the centre-forward position. While not lacking in resources with the talismanic Miroslav Klose, Mario Gomez, André Schürrle and Max Kruse all capable of playing up front, the trouble remains that Klose will be 36 next year. Gomez is nowhere near his beastly best of years past because of an onset of injuries, while Schürrle looks distinctly out of sorts as an all-out centre-forward, in addition to the fact that he could be getting more playing time if he were not in a Chelsea team top-heavy with attackers. Germany’s defence, too, has come under fire of late for shipping far too many easy goals – think of the 7 goals they shipped against Sweden over two games and the 4-3 loss to USA. But expect Germany to go through this group and go very far in this tournament.
Portugal has all the makings of a great team. Led by the excellent Cristiano Ronaldo, Portugal is a team brimming with exciting players all around the pitch. There isn’t a position in which Portugal is found wanting… well, except for a good centre forward. The thing is, CR7 is so excellent that sometimes, his presence overshadows the fact that Portugal is chronically over-reliant on Ronaldo. As superhuman as he might be, it is pretty hard to expect Ronaldo to be Portugal’s winger, creator, playmaker, No.9, No.10, No.7 and finisher, all at the same time.

The minute you are able to mark him down, Portugal’s attack seems stale. Just look at the displays by Israel in the group stage. Although the Israelis themselves were inconsistent, they did really well in locking down Ronaldo with good tactical play. What happened as a result? Oh, Portugal failed to beat a much weaker Israel squad, that is all. As such, either one of Hugo Almeida (Besiktas) or Hélder Postiga (Valencia) has to step up to relieve Ronaldo’s burden. As it is, expect Ronaldo to be at his magnificent, superhuman best come 2014.
As for Ghana, many have doubted their credentials and the decision of coach James Appiah to blend in relative unknowns into the Ghanaian squad. However, this has also been raised the last two times Ghana have qualified for the World Cup, which both yielded knockout appearances. Ghana are an exciting attacking team, boasting Kevin-Prince Boateng (Schalke), the Ayew brothers (both Marseille), Christian Atsu (Vitesse) and captain Asamoah Gyan (Al-Ain).
The 6-1 playoff victory over Egypt is testament to their attacking prowess. They also ended their qualifying run with 25 goals – the highest amongst the African teams. Keep an eye out, too, for Quincy Owusu-Abeyie, once considered to be one of the fastest players in the world. Ghana will be no pushovers in this group, but lack the quality to edge past Germany or Portugal this time round.
To wrap up this challenging group, the United States has improved by leaps and bounds since the arrival of Jürgen “Flipper” Klinsmann as manager. However, they have yet to find an ideal lineup, using 37 players over 10 qualifying games, and time is fast running out. But United States aren’t one place below England in the world rankings by sheer luck, for they have evolved under Klinsmann to be an unit which is confident and competitive. An example of this spirit is how the team battled to score two late goals that sunk Panama 3-2 in a formality of a game, seeing as it had already qualified for the World Cup beforehand.

The United States has also produced some good results in friendlies this year, including shock 4-3 wins over (an understrength) group rivals Germany and Bosnia and Herzegovina. Watch out for the iconic Clint Dempsey (Seattle) working together with the talismanic Landon Donovan (Los Angeles) to provide an attacking thrust for an equally impressive Jozy Altidore (Sunderland). Like Ghana, United States is a good team but are not as good as Portugal or Germany. They are, however, incredibly capable of providing an upset or two, so who knows? Just ask Portugal, who were knocked out by the Americans in the group stage of the 2002 World Cup.