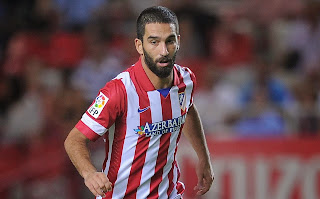 
United and Liverpool have both been scouting the Turkish international this season according to Europsport Turkey, however, would have to part with €40 million to activate Turan's minimum fee release clause. The Turkish international's release clause was increased from €24 million to €40 million as part of a the contract extension he signed with Atleti earlier this season. The Red Devils were reported to have activated Turan's previous release clause - €24 million - two days before the end of the transfer window however, complications over his paperwork resulted in the Premier League outfit failing to open talks with the Turkish international. Turan's agent Ahmet Bulut has stated that the 26-year-old would be interested in a move to the Premier League."A destination in the Premier League would be to the liking of the player and I can confirm there are clubs interested, like the two mentioned," Bulut said last season."He wants to work in England." Despite the interest Atleti have rejected all previous offers for Turan and the Turkish international has become an integral part of Diego Simeone's team.Turan has also played down speculation that he may be on the move in the past. "I am delighted to have signed a contract extension with Atletico Madrid. I feel like i'm part of a family here," Turan said.The 26-year-old has lifted the Europa League, European Super Cup and Copa Del Rey since joining the Colchoneros. The Atleti playmaker has three goals and five assists in 15 appearances this season.Atleti are currently second in La Liga and just three points behind Barcelona. The Colchoneros are also first in Champions League Group D with 12 points after winning all four of their matches.