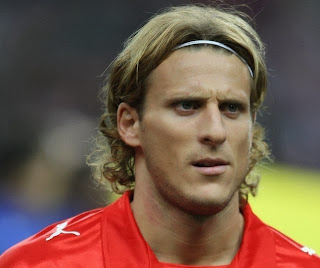 Former Manchester United forward, Diego Forlan, has today hinted he could be closer to move back to the Premier League

Forlan signed for Brazilian side, Internacional after a successful period in Europe with Atlético Madrid and Inter Milan to name just a few.

Now West Ham United have looked at the 34 year old to bolster their ranks with big money signing Andy Carroll out injured.

Forlan had this to say about the move: “I know there are some offers – we’ll see which ones are true and which ones will prove to be mere speculation. Then we’ll talk with the chairman of Internacional,” he is quoted by TalkSport.

Forlan joined up the Brazilian side in 2012 and has scored 10 goals in 24 appearances.

at 10:15 AM
Email ThisBlogThis!Share to TwitterShare to FacebookShare to Pinterest
Labels: Diego Forlan, Rumors, West Ham