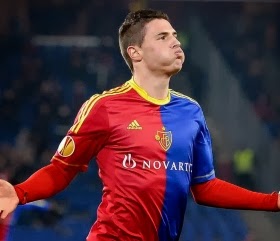 Free scoring center back Fabian Schar remains a transfer target for Arsenal's manager Arsene Wenger. The Gunners sent scouts to monitor the 21-year-old in action in the 1-0 win over Chelsea this week


Schar has forced his way into Ottmar Hitzfeld's national team plans this season and is looking forward to playing a part in Switzerland's World Cup campaign next summer in Brazil. Schar has scored 3 goals in 5 games from defence for the national team and for his club the player has also been amongst the scorers on a regular basis.

Last season Schar helped his club to the Swiss Super League title and it appears as if his club have similar aims as they currently top the league as well.The defender has been on Arsenal's radar for over 6 months and had been Arsenal lead race FC Basel starlet Fabian Schar linked with a transfer to the Emirates back in November.

Wenger is hoping to sign Schar to play as a backup defender to Laurent Koscielny and Per Mertesacker as there remains some doubt over the long term future of club captain Thomas Vermaelen.