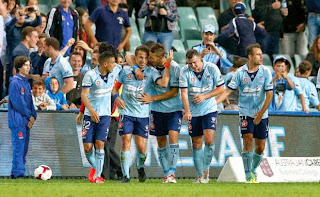 Season for Nikola Petkovic in Australia began as just he could covet. He made his debut for Sydney FC and was one of the most deserving to secure victory against Newcastle Jets (2-0)


As a confirmation of good games came and choice in ideal team first round of "A League", with team-mate and captain the legendary Alessandro Del Piero.

"Well we started, we have a high quality team, but our biggest advantage over the other It is Alessandro del Pierro. Such aces does not have much, and even less human size as he is. He It is a gentleman, a man as it is very rare. It is my honor and privilege to play with him, "said Petkovic, who at coach Farina plays as a stopper.

Del Pierro is second season in Sydney and the "main culprit" is what football euphoria impassioned Australian soil.

"It's hard to describe how much people love and respect him, but also how he shows respect for everyone around him. Every teammate in training helps wiht advice, nothing him is not difficult to do and no fans which do not come to your needs, whether you are talking about taking a photo, autographs ... With all this, it is still an extraordinary master of football which was confirmed by goal against Newcastle.

In Sydney believed that with Del Piero, Emerton, Petkovic and a few good players can to the title ...

"The title is the goal, but the season is long, and the rivals have good players. At almost every team plays some great name, like for example Shindji Ono, Harry Kewell, Emile Heskey ... All teams are physically maximum ready, there is a lot of running and everything is bursting with duels. If I compare them, the Australian league most looks like English Championship "concludes Petkovic, whose Sydney on Saturday in the second round guest in Brisbane.
at 1:54 PM
Email ThisBlogThis!Share to TwitterShare to FacebookShare to Pinterest
Labels: Australia