WC U17: It began the World Cup for Cadets

WC U17: It began the World Cup for Cadets 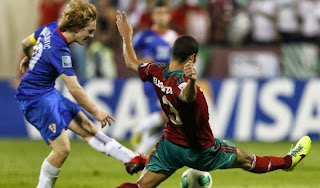 Croatia disappointing at the start of the championship, triumph of Tunisia over Venezuela


With the defeat is Croatian U17 national team opened appearance at this year's World Cup U17, in the United Arab Emirates.

Scorers for Morocco were Achahbar in the 27th and 40th minute and Jaadi in 45th, while the only goal for the team of Ivan Gudelj scored Robert Murić half an hour before the end of the game. Although they had the role of favorites before the match, the Croatians played very bad that especially applies on the first half tonight's game.

Moroccans are in the finish of the match had a chance to finish off the Croats, but the concentration was still not at the desired level. Croatia plays their second match on Monday, and the opponent will be Panama.

In today's second match Tunisia is with goals Jbel and Ben Larbi from the penalty came to triumph over the selection of Venezuela. Honorary goal for Venezuela scored Marquez in the 52nd minutes.
at 11:19 AM
Email ThisBlogThis!Share to TwitterShare to FacebookShare to Pinterest
Labels: WC U17