France convincing against Australia in a friendly match

France convincing against Australia in a friendly match 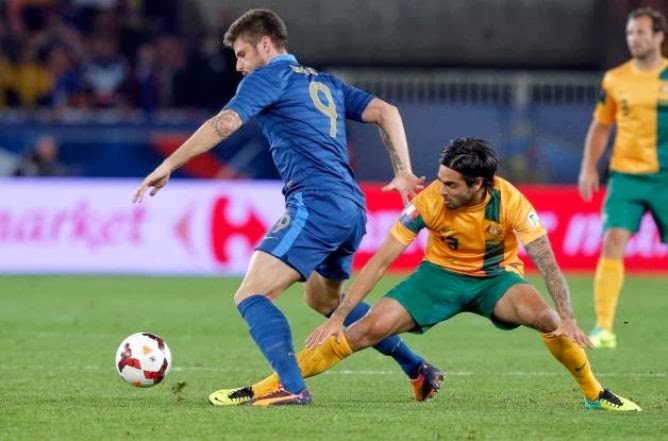 France overcame Australia with a convincing 6:0 in a friendly match on that way made ​​it clear to all potential opponents in the barrage to 'pray to God' to avoid them


Socceros are smashed on 'Park Princes' in front of about 30,000 spectators and seen off with six goals in the network.Series of goals opened Frank Ribery from penalties already in the eighth minute, followed by two goals Arsenal attacker Olivier Giroud in the span of ten minutes, first of which was masterfully.
After 29th minute in the scoreboard writes 4-0 after a goal by Johan Cabaye.

Just as it started the second Half time, quarterback Matthew Debushi hits fifth goal, in the 50th minute Karim Benzema set the final 6:0.

Real Madrid striker was the first goal in the national team jersey after 16 months!

France is in the group I qualification for the Mundial in Brazil, where Spain tonight's triumph over Belarus, secured first place.

Australia has previously provided a performance at the World Cup while France through the barrage to try to secure a visa for Brazil.

at 3:58 AM
Email ThisBlogThis!Share to TwitterShare to FacebookShare to Pinterest
Labels: Australia, France, Friendly