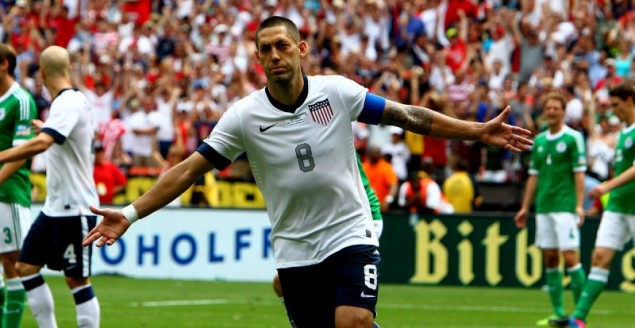 Christopher Hurtado (PER) gives Peru the lead at the 20th minute with a well-placed shot to the far post, out of the reach of Venezuela goalkeeper Daniel Hernandez

Jose Rondon (VEN) equalises for the hosts and all of a sudden both sides now and have everything to play for again.

Cesar Gonzalez (VEN) scores for the hosts at the 25th minute, and the entire stadium erupts! Peru introduces a double-switch to try and search for an equalizer

At 81th minute, Romulo Otero (VEN) puts the game out of reach with a great goal, but at 98TH minute Carlos Zambrano (PER) scores and close the score.

Eddie Johnson's towering header off a set piece early in the second half has given the United States a 1-0 lead over Mexico.

Jurgen Klinsmann made ​​one change at halftime, replacing Fabian Johnson, who was apparently injured, with Michael Parkhurst.

The U.S. got going quickly with Alejandro Bedoya nearly setting up a goal for the U.S. in the 49th minute after he ran onto a long ball on the right and sent a low cross that Eddie Johnson could not quite get it.
Turns out it was a preview of sorts.

Minutes later the U.S. earned a corner kick and Johnson would not be denied as he out-jumped two defenders and powered a header past Jose de Jesus Corona to make it 1-0.

The United States time a dagger in Mexico's heart thanks to Landon Donovan's in the 78th minute to give the Americans a 2-0 victory.

Mix Diskerud was the engine for the goal taking a wonderful touch at the top of the box and cutting towards the Touchline waiting for runs to be made ​​at the far post. Diskerud's low cross was touched on ever so slightly by Clint Dempsey, Landon Donovan giving the time to get in position and redirect the ball into the net past a helpless Jose de Jesus Corona.

Mexico were in serious trouble before the goal and they're probably done and dusted after the goal. For the U.S., they can start making nearly Their travel arrangements for Brazil next summer.

at 12:37 AM
Email ThisBlogThis!Share to TwitterShare to FacebookShare to Pinterest
Labels: Qualification