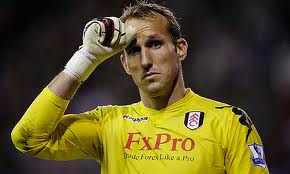 Mark Schwarzer has been Australia's goalkeeping king for over a decade, but Mitch Langerak says he's pulling out all the stops to dethrone him


Schwarzer , who turns 41 next month , is set to become the oldest player ever to appear at a World Cup when the showpiece kicks off in Brazil in June.

But there 's no shortage of glovemen waiting in the wings to take his No.1 spot .Despite being uncapped , 25-year -old Langerak has often been touted as Schwarzer 's long -term successor and he's hopeful of Increased game time with the powerhouse German club Borussia Dortmund this season to boost his cause.

Langerak and Schwarzer are with the Socceroos in Brasilia preparing to take on five -time world champions Brazil in an international friendly on Wednesday ( Thursday AEST ).

But the options do not stop there.Adam Federici , who largely had a season to forget with relegated English club Reading, and Brad Jones , now seemingly the third- choice at Liverpool, are both still in the frame.

Not to mention A -League duo Nathan Coe and Mark Birighitti , who were part of Holger Osieck 's recent East Asian Cup squad.

But despite the goalkeeping riches , Langerak says he's focused solely on making sure that, when it comes time to replace Schwarzer , he's the man chosen.

" At the moment Mark Schwarzer is our number one and he's done so well for us over the past 10 years or more and that's how it is , " said Langerak.

" But there are so many other ' keepers that can come in and fill that second and third position and time as much pressure on Schwarzer as we can.

"For me personally I try to not worry about what other goalkeepers are doing and what the standings are between us because it's just important to show what I can do in training and when I play and just let everything else look after it self .

" Of course I want to be the next number one keeper , very badly."It's obviously a dream to play for your country even just being part of the squad here is fantastic."In Germany , Langerak , remains stuck behind Dortmund 's goalkeeper Roman Weidenfeller No.1.

But his seven starts have all been victories and he says coach Jurgen Klopp has Indicated he'll get more game time this season.

"I've spoken to the coach and what he said was very positive for me , " he said.

"We spoke at the end of last season about the prospect of me going on loan and he was against it and really wanted me to stay.

"So from that chat I've got a good vibe going into this year ... the inclination I got is that I'll get chances when they arise.

" The season is so long so if I get chances it's up to me to do well in these games. "

at 3:05 PM
Email ThisBlogThis!Share to TwitterShare to FacebookShare to Pinterest
Labels: Australia