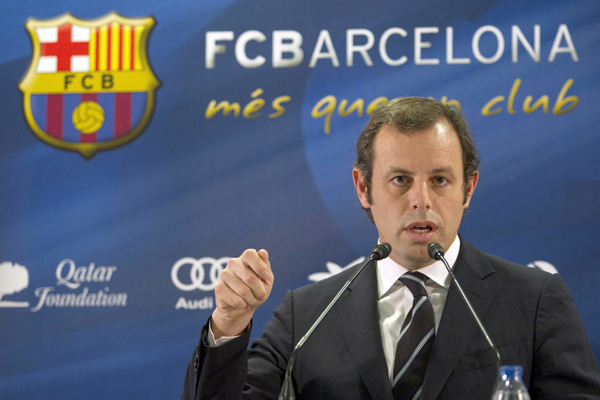 Sandro Rosell in an interview with Catalan Sport said that Lionel Messi is worth - 580 million!?


Barcelona chairman Sandro Rosell has given an interview to the Spanish newspaper Sport and he talked openly of many subjects Such as Tito Vilanova's decision to leave the club, Gerardo Martino's signing to replace the spanish manager, Neymar's transfer and of Lionel Messi.

When confronted with the possibility of transfering the Argentinian superstar, Barça's chairman said that if any club wants to sign the 4 times FIFA World Player of the Year, they will have to pay the 250 million euros release clause plus 56% of taxation that would inflate the value up to 580 million euros. Rosell added that the only player of the team that is not negotiable is Messi.

Spanish media earlier published news that Messi has requested an urgent meeting with Rosell. Argentine allegedly learned that Neymar earns more than him.

"I think at this point Messi should help Neymar to better adapt to the Primera.

I am sure that to him Neymar be of great help in the game, "skillfully avoided the answer Rosell.
at 10:35 AM
Email ThisBlogThis!Share to TwitterShare to FacebookShare to Pinterest
Labels: Barcelona, Lionel Messi, Premiere