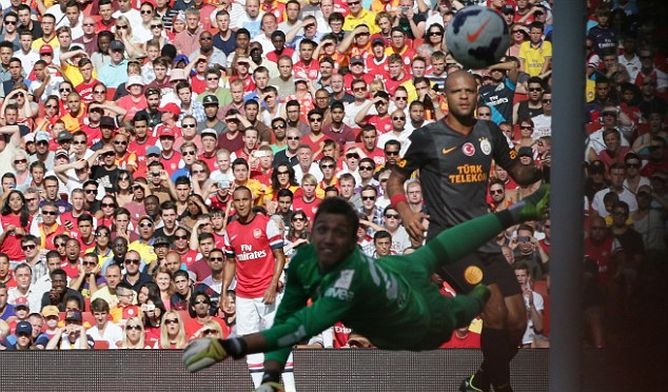 Drogba returns to haunt Arsenal with double in Emirates Cup


Arsenal's nemesis Didier Drogba returned to haunt his old rivals by coming off the bench to clinch the game for Galatasaray with a double in the Emirates Cup.

Having taken a first-half lead thanks to a cross-come-shot from Theo Walcott, the Gunners looked on course to regain Their annual pre-season trophy.

But the introduction of the former Chelsea striker at half-time swung the balance in the Turks' favor, and after Burying a penalty he won dubiously on 77 minutes, Drogba smashed a left-foot shot beyond Wojciech Szczesny with three minutes remaining to clinch the trophy for Gala.

That brace takes Drogba's tally to 15 goals in 16 games against the Gunners in all encounters.

The Ivorian, who took some stick from the Emirates crowd throughout the game, brushed off an ill-feeling, saying: "It's just a little bit of fun, and they're trying to stop me scoring, but it's all part of the game."

at 11:12 AM
Email ThisBlogThis!Share to TwitterShare to FacebookShare to Pinterest
Labels: Emirates Cup, International Cups