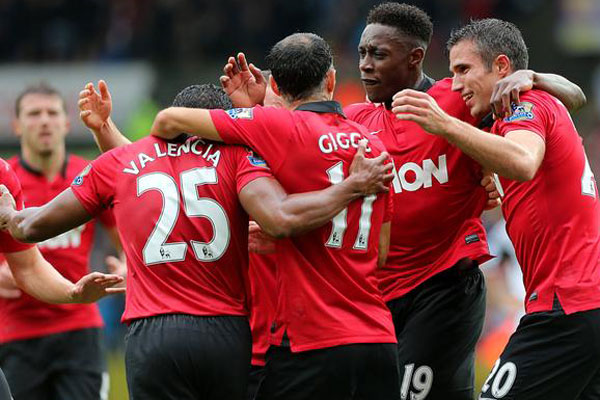 In the major games of the day, Liverpool beat Stoke City 1-0 at home in the first game of the season, Arsenal lost 3-1 to Aston Villa at the Emirates, while Manchester United got off to the best possible start under David Moyes as they dispatched Swansea City 4-1 at the Liberty Stadium in the late kick-off game


Daniel Sturridge scored the only goal of the early kick-off match as Liverpool saw off Stoke City 1-0 in a competitive encounter at Anfield. Stoke City could have come away with a point had it not been for new goalkeeper Simon MIGNOLET's heroics as he saved a late penalty to Ensure all three points for the Merseyside club.

Arsenal would have hoped for a better start to the season as they went down 1-3 to a resurgent Aston Villa side at the Emirates Stadium in a game that was marred with controversial refereeing decisions. Olivier Giroud scored the opener for Arsenal, but Christian Benteke, scoring a brace, and debutant Antonio Luna ensured that Villa came out worthy winners. To add to Arsenal's woes, a number of key players are suspected to have picked up injuries and may miss the start of the season. Laurent Koscielny was red-carded and will be unavailable for the next league game against Fulham.

Manchester United's new manager David Moyes would be relieved man as his team comfortably dispatched League Cup winners Swansea City 4-1 at the Liberty Stadium. Despite not looking their best, United still managed to score four goals thanks to their strikers Robin van Persie and Danny Welbeck - who scored a brace each. Debutant Wilfried Bony also got on the scoresheet as he scored the consolation goal for Swansea.

In the other games of the day, West Ham beat new boys Cardiff City 2-0, as Joe Cole and Kevin Nolan scored for the London side. Norwich City held Everton to a 2-2 draw. Steven Whittaker and Ricky van Wolfswinkel scored for Norwich, while Ross Barkley and Seamus Coleman scored for Everton. Fulham and Southampton registered 1-0 victories against Sunderland and West Brom respectively.

at 11:57 AM
Email ThisBlogThis!Share to TwitterShare to FacebookShare to Pinterest
Labels: Premiere League