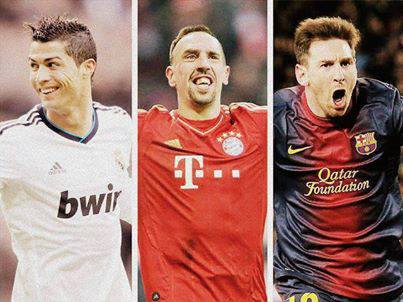 
The France international, with his extraordinary performances for Bayern last season, was instrumental in his team winning the treble-Champions League, Bundesliga and DFL-Supercup, under Jupp Heynckes.

He was Decided as the winner based on live voting by journalists during the Champions League group stage draw.

Ribery, on his chances to win the award, was quoted as saying by Bundesliga.de: "Last season was perfect, so my chances are certainly good. I was consistent. I've done everything I can. I'm tense, but also relaxed. There are not many people out there that would deny me the prize. "

The 30-year-old, saying that his role is different from that of the other two contenders in Messi and Ronaldo, added: "I'm more of a provider, even though I chip in with the odd goal like last Saturday against Nuremberg."

at 11:43 AM
Email ThisBlogThis!Share to TwitterShare to FacebookShare to Pinterest
Labels: Europe News