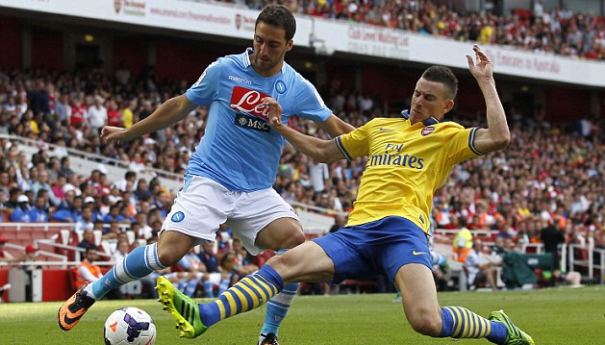 
Napoli led against domestic composition at the Emirates Stadium with a 2-1 to the finish, but the host managed to save themselves.

In the 18th minutes, the best chance for the Gunners to equalize, but Pepe Reina defends shot of Lukas Podolski from the penalty. After 29 minutes, the Italians have already safe 2:0. Hamshik was great hired Pandev, Macedonia without problems matts Fabianski.

Up to 73 minute nets rest, and then masterful Giroud goal for 2-2. Managed the team Arsene Wenger avoided defeat in 86th minutes, when hit the stopper Koscielny for 2-2 .

Arsenal and Napoli now have three points (one for a draw and two for goals scored). Earlier Galatasaray with 1:0 defeated Porto, which is only without points after the first day before the seasonal tournaments.
at 10:31 AM
Email ThisBlogThis!Share to TwitterShare to FacebookShare to Pinterest
Labels: International Cups