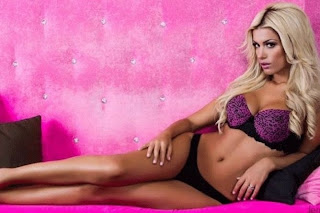 During the break out of the match between Fenerbahce and Arsenal TV cameras "migrated" from the lawn into the stands where her beauty attracted the attention of one supporter Fenerbahce. Attracted attention and photographers, so that her pictures began to circulate in social networks.


Having captured that encourages "canary", the media found out who it was. In fact, a big fan of the Greek Fanerbahce is Alexandra Loizou. Greece model was otherwise in relation with the Greek national team members, Samaras, and during transfer was non-stop in the frame. This lady is often take a pictures for men's magazines.

at 1:37 PM
Email ThisBlogThis!Share to TwitterShare to FacebookShare to Pinterest
Labels: WOMEN