Bayern started with victory in defense of title

Bayern started with victory in defense of title 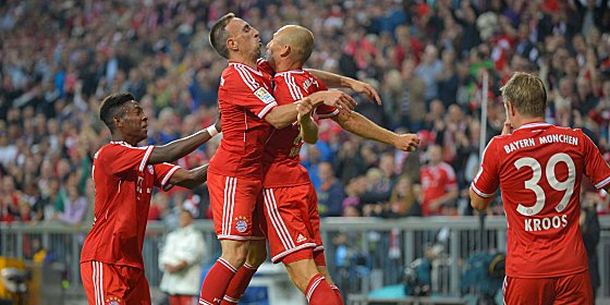 
Bavarians are without major problems in the first match of the new season Bundesliga mastered Borussia, which is them and this time scored goal, and so continued the tradition. Actually, it was an own goal Dante stopper Bayern ...

In the 12th minute Schweinsteiger take away the ball guests in the middle of the field, added to Ribery, this fantastically passed to Robben, who is running the ball hit into the net for 1-0.

A few minutes later, Mandzukic scored for 2-0. Centered is Robben from free kick sideways to the right, Ribery blow defended goalkeeper Borussia and Mandzukic is shooting position and scored for new enthusiasm in the stands.

Great opportunity had guests in the very next attack, but Raffael hesitated and from a good position, sideways to the left, shot next to Neuer right post. The same player, and in the 24th minute tries a shot from 12 meter but of straight at Neuer.

Great chance Borussia had in the 30th minute. Instantly all happened, but Neuer has managed to retain their network after hitting a noted Raffael.

Five minutes before the end of of the first part Dante, a former player for Borussia, score an own goal. After an easy cross from the left side, went around land, the Brazilian stopper in front of Neuer cleaning the ball into his own net.

In 60th minute Robben pulled the ball from the right side, sent return ball for Thomas Muller, who hit the post.

In 67th minute were awarded a penalty for Bayern because Dominguez hand touched the ball in his penalty area. Muller shot penalty but defended Mulle, but Dominguez again strikes the ball with his hand and brings a new opportunity for Bavarians. Alaba was accurate this time.

at 2:03 PM
Email ThisBlogThis!Share to TwitterShare to FacebookShare to Pinterest
Labels: Bundesliga