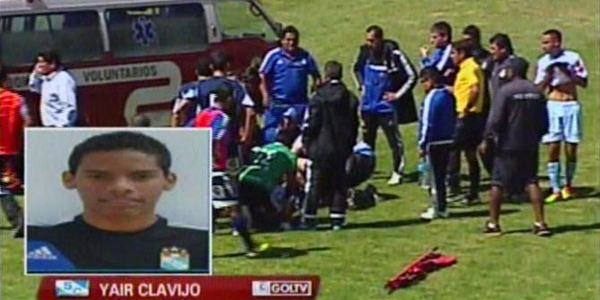 New tragedy on the football field, a young Peruvian Yair Clavijo (18), Sporting Cristal football player, died before the end of the derby match with the leading Real Galsirasom in Kusko


By tragic event occurred five minutes before the end of the match, Clavio heart skip a beat and he collapsed on the field. Immediately he was run up to help the players and the doctors, but no one in the stadium had dehibrilator, which is most needed in such cases.

Attempts to revive did not give a result and soon was identified death unfortunate football player.

The match was suspended and will only determine when it will again be played.

During the 2012th FIFA has announced that in the last five years because of heart problems died more than 80 active football players on the courts around the world.
at 10:17 AM
Email ThisBlogThis!Share to TwitterShare to FacebookShare to Pinterest
Labels: Scandals