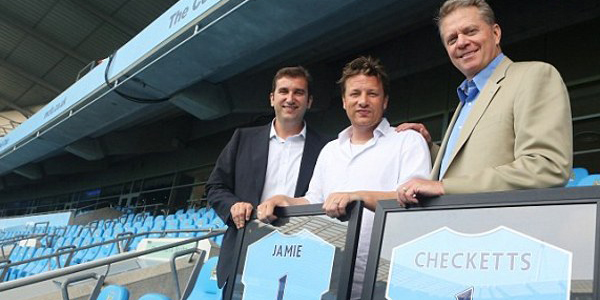 Manchester City brought another sound reinforcement. However, it is not the player, but it will certainly be one of the most important factors in play super rich club from Etihad Stadium


Specifically, Citizens brought none other than celebrity chef Jamie Oliver.

After signing a contract worth 6 million pounds, Oliver will include in his project entitled 'Fabulous Fanfayre' employ 200 people who will be responsible for serving food at the stadium during the matches.

Offer includes seven new meals, including pies, hot dogs, burgers and fries with rosemary, and it is important to note that all products are local.
As a football fan, Oliver has experienced bad food at the stadium.

"Etihad is not so bad so far, but the food is often in English stadiums simply rubber. You did not have too many healthy choices, that we want to supply and changes here, "said the celebrated chef.

Of course, what interested the fans is the price, which will indeed be higher than before. Oliver is hoping that it will not be too much difference and that for fans will not be a problem.
at 12:14 AM
Email ThisBlogThis!Share to TwitterShare to FacebookShare to Pinterest
Labels: Premiere League, Transfers