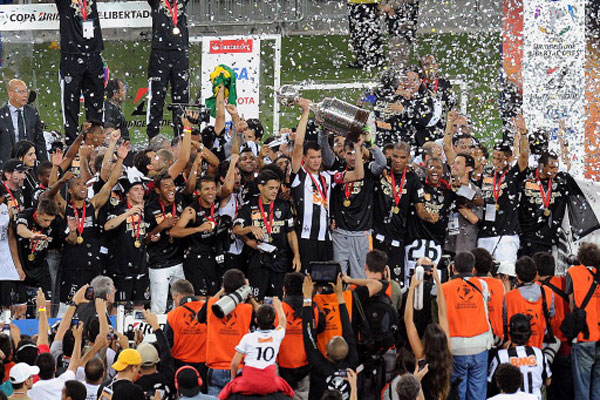 Led by Ronaldinho, Brazilians erase a deficit of two goals against Paraguay Olympia and penalties after they won the most important South American title


After 2-0 for Paraguayan in Asunsion, few people believed that Atletico Mineiro hit back.

However Brazilians in their stadium halved advantage rivals at the start of the second part, Ronaldinho is centered, Wilson Pittoni tipped the ball, Jo in the right place for 1:0.

Afterwards they had lined dangerous situations in front Paraguay's goal, Leo Silva hit the crossbar, but the same player after cross Bernard increased to 2:0, Olympia no longer had the advantage.

Previously Manzur from the ranks guests got a red card. Olympia was held in overtime, waiting for the penalty, but Miranda and Himenez were not precise. Alejandro, Guillermo, Jo and Leo Silva did, there was no need to Ronaldinho perform Ronaldinho penalty, at the end of 120 minutes was 2:0 and 4-3 on penalties, a great victory for the Brazilians, and Ronaldinho was happiest.

"They said I was done, not just me and Jo, they were wrong, I returned to Brazil to win this title," said Ronaldinho who has now practically won everything at club and international level!
at 1:22 AM
Email ThisBlogThis!Share to TwitterShare to FacebookShare to Pinterest
Labels: Copa Libertadores, South America