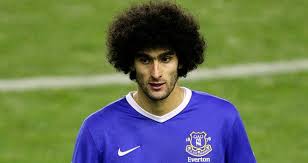 Legendary Arsenal goalkeeper David Seaman has revealed in an interview with Sky Sports News that his former club activated a 22 million pounds high repurchase clause , which in his contract has Marouane Fellaini


According to the British media already Arsenal for weeks, if not months, trying to soften Everton and for less than 20 million pounds to bring great Belgian national team player Fellaini, known for his Afro.

Club from Liverpool did not want to agree to a lesser amount than that stated in the contract as the Belgians buy-out clause (22 million) and Arsenal, says Seaman, had no choice but to be activated. "The team is hungry for trophies, and that it has to a change. He (Fellaini) is a great player and a lot of would help." To date, none of these parties has not officially commented on the case, but not denied. It is equally likely to end and this transfer-story could come very soon.
at 4:30 AM
Email ThisBlogThis!Share to TwitterShare to FacebookShare to Pinterest
Labels: Rumors, Speculation