Spain: "Judge with 13 mistakes," judge to Mourinho in the final Cup of King 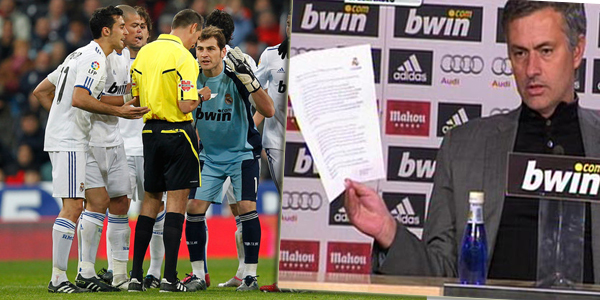 Does anyone remember a match at the Santiago Bernabeu between Real Madrid and Sevilla played 19th December 2010th year?


Or maybe the judge mentioned match, which Real Madrid allowing that occasion shared nine yellow and one red card?

Jose Mourinho after the game at a press conference came with the paper on which were written all the mistakes the judge in that game. There were 13 of them at the expense of Real Madrid.

The same judge will dispense justice in the final of the King Cup, which Real plays against city rivals Atletico 17th May.

Judged is The Real semi-finals of the King, in the first leg at the Bernabeu ended 1-1.
at 10:13 AM
Email ThisBlogThis!Share to TwitterShare to FacebookShare to Pinterest
Labels: Premiere